February was a slow reading month, but I did enjoy the three books I got to read! There were some pretty memorable bites as well. Lets take a look:

First I read An Unkindness of Ghosts by Rivers Solomon. This book is a science fiction novel that I acquired through the Page Habit subscription box for the month of October of last year. Solomon takes us on a trip on the HSS Matilda, a spaceship that has been traveling towards the Promised Land. People have left their world to go on this ship because their planet was dying. Now, they are separated by class and gender and are trying to survive the trip to this Promised Land when things start to go wrong. You can read a full review here. 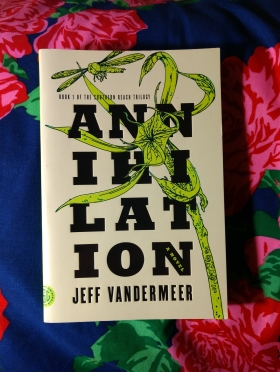 I stayed on the science fiction track and read Annihilation by Jeff Vandermeer. When I bought this book it was purely because of the cover but when I learned that it involved women scientists going into a strange place called Area X, I was even more intrigued. The story is actually slower than I expected, told from the point of view of the Biologist, who is also an unreliable narrator. It’s very slow for the first 100 pages or so and then it picks up near the end. I’m working on a post where I compare the novel to the movie adaptation so that should be posted in the next few days. 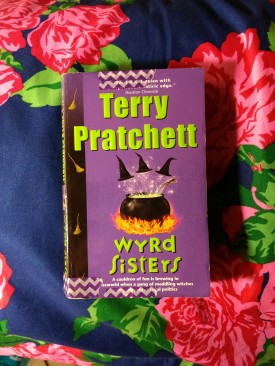 Finally I read Wyrd Sisters by Terry Pratchett, another installment of the Discworld series. This was such a great book! It’s a take on Macbeth from the point of view of the witches, and it references quite a few other Shakespeare plays. This one is a tad more bloody than others, as well as more cheeky at times. The characters we follow are Granny Weatherwax, Nanny Ogg, and Magrat. Pratchett manages a very clever novel full of interesting characters, from a violent cat to Death itself, and Hwel, a dwarf with all the inspiration to write plays like no one has seen before. Simply fantastic.

One thing that these three books had in common was the nature of, well, nature. Nature as a sentient being that can revolt on the humans when they decide to ignore it completely. Nature as a group of beings that evolve so that they can survive the harm being done to them by humans. Or lack of Nature and the effect that it has on humans. Each of these books teaches us to appreciate and take care of all living beings, be they animal, plant, or human. I loved these books for this message and for how they all seemed to group together to make that message seem even louder.

And so, even though this month was a tad slow, it was still a good month of reading. I am still reading Equiano: The African but I am taking my time because it deserves to be read a bit more closely. I am learning so many things about slavery and the world in the 1700s! Hopefully by next month I’ll be able to include it in the wrap up. I’m also still reading The Goldfinch with the book club and that will also be done by next month’s wrap up.

How did your reading go in February? What was your favorite book of the month?

View all posts by psanchez820

Reading on the plane! I decided to start a new book for my trip to Portland, mostly because what I'm currently reading are big hardback books 🤭 So here I go with Louise Erdrich's The Antelope Wife! Have you read it? What kinds of books do you like to read on planes? #currentlyreading #theantelopewife #louiseerdrich #planereading
I'm a bit late but here are my highlights of Jan 1st, 2020. I spent New Year's in LA and even got to see the fireworks at Hogwarts! It was a most wonderful way to welcome 2020 in the company of @romy_lv #AFTAN2020 #bfftraveldiaries
Happy birthday to me! 🥳 I am now 31 years old! I continue learning, both intellectually and emotionally. I don't know what lies ahead for me but I know it'll at least be full of dancing and cuddling with my cat 🥰 I bought a quilt for myself from @thefabricpotpourri and it's so perfect and beautiful! Seiko really liked it and asked if it was for her and I didn't have the heart to tell her no 🤣 #catmomproblems 😹 I'm off to see Frozen 2, courtesy of @midnight_rose58 (love you sis!) ❄☃️ Have a happy Saturday, do something nice for someone today 💖 #quilt #birthday #seiko #frozen2
Hello? Anyone there? I know it's been a while. I've had very little desire to really post here, you'll mostly find activity in my stories in the mornings. Anyways, I sat down to lunch today and saw a good picture so I decided to share my current read, Sourdhough by Robin Sloan. This was recommended by @naomifs918 and it is excellent! I'm really enjoying reading about Lois and her adventures with her Starter 💕💕 #sourdough #robinsloan #currentlyreading
I'm on the bus to work hauling around Wanderers by @chuck_wendig. And let me tell you that this was never my intention! This was supposed to be my "before bed" book so I'd only read it at night in the comfort of my bed. But no, can't do that anymore, it's too good! I'm not even quite sure what's happening yet, it's some kind of epidemic? What I do know is that between the writing, the characters, and the mystery, I gotta keep reading. It reminds me of Michael Crichton, and author I absolutely love; I've read almost all his books. So yeah, let's hope I don't miss my stop! 😅 #wanderers #chuckwendig #onthebus #readingonthebus
Landline by Rainbow Rowell is such a wonderful book to get back into the groove of reading! In this novel, Georgie finds herself able to talk to her husband but back before he proposed. Think time travel but just with a phone ☎️ a landline to be exact. Do kids these days even know about landlines? Like when others in the house could join in a call or you had to make sure no one else was listening to your call or playing with the cord while you talked. Even dialing was different if you had a rotary phone, it required patience and remembering people's phone numbers, or consulting the phone book that was always next to the phone. Did you have a rotary phone? Who did you call with it? I remember talking to family who lived in other states in Mexico and basically just changing spots with other family members so everyone got a turn. #landline #rainbowrowell #kidsthesedays
%d bloggers like this: